The BC government is launching a public inquiry into how international criminals managed to launder billions of dirty funds in the Canadian economy. The province’s announcement comes after multiple reports last week exposed the extent of Canada’s money laundering problem and called for a beneficial ownership registry.

The issue has exploded in the media with coverage across national news shows  and even the BBC exploring the need for a public accessible registry to deter anonymous criminal activity. C4TF program manager Sasha Caldera was quoted in this Toronto Star article about Ontario’s refusal to even discuss a registry despite support from municipal and provincial real estate associations.

When questioned about the findings last week, Prime Minister Justin Trudeau called them  “alarming” but did not commit to any action. This week, a Liberal-appointed Senator criticized Finance Minister Bill Morneau for his government’s lack of action in tackling money laundering and tax avoidance.

Momentum for change is building and C4TF will continue pressing hard with our recommendation for an open registry. Please help us spread the message by signing and circulating our petition to Finance Minister Bill Morneau. 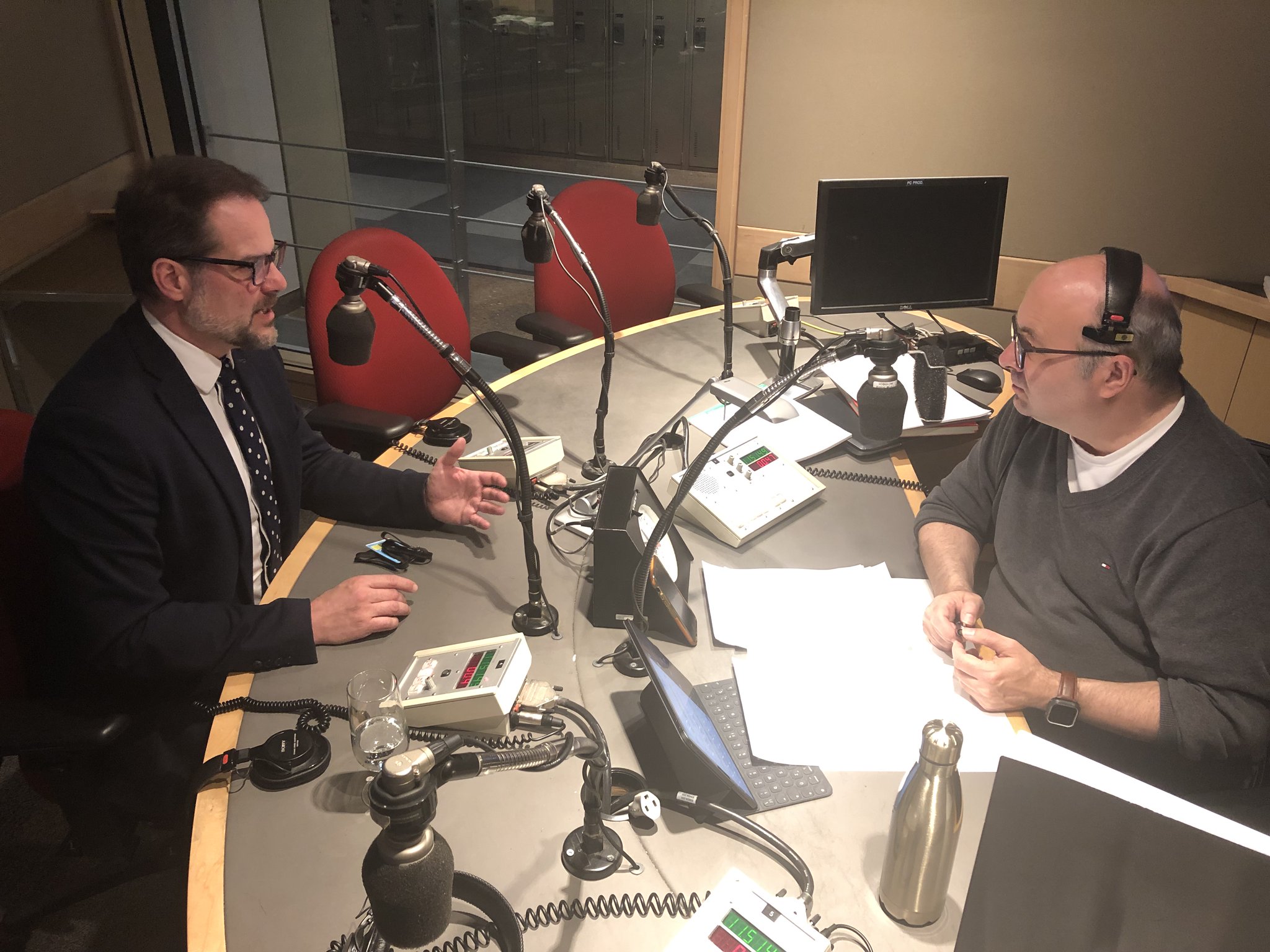 NDP MP Alexandre Boulerice talks to media this week about his party’s plan to tax the revenues of internet giants such as Facebook, Amazon and Google. Twitter photo.

The NDP has come out with an election promise to level the digital playing field in Canada. Quebec MP Alexandre Boulerice announced his party will tax the revenues of internet giants like Facebook and Google, similar to the GAFA tax introduced by France. He also vowed to remove the deduction for foreign internet advertising and implement a sales tax on digital products and services, as Quebec and Saskatchewan have.

The party made its announcement at Cinéma Beaubien, an independent movie theatre in Montreal, to highlight how the current bias in taxation hurts our arts and media sectors. A column in La Presse endorsed the NDP’s plans as a long-overdue federal measure to protect regional businesses and cultural content.

That sentiment seems to be growing among Canadians who wish to see large untouchable internet companies regulated more fairly. A Nanos poll this week found 77 percent of Canadians want foreign companies that broadcast TV programs into the country over the internet to be subject to the same rules as domestic companies.

Media are picking up on the government’s failure to move on this as well. A column in the Star this week looks at Canada’s lack of action compared to its OECD peers that are cracking down on Netflix and other foreign digital corporations. Another column observes how the federal government is finally coming under criticism for its loose regulation of internet giants.  CBC News asks what is Canada waiting for?

Pressure to hold large digital companies accountable couldn’t come at a better time as Canadians get ready to head to the polls this fall. A great op-ed this week by John Anderson reflects on why we should make taxation of the digital economy an election priority. 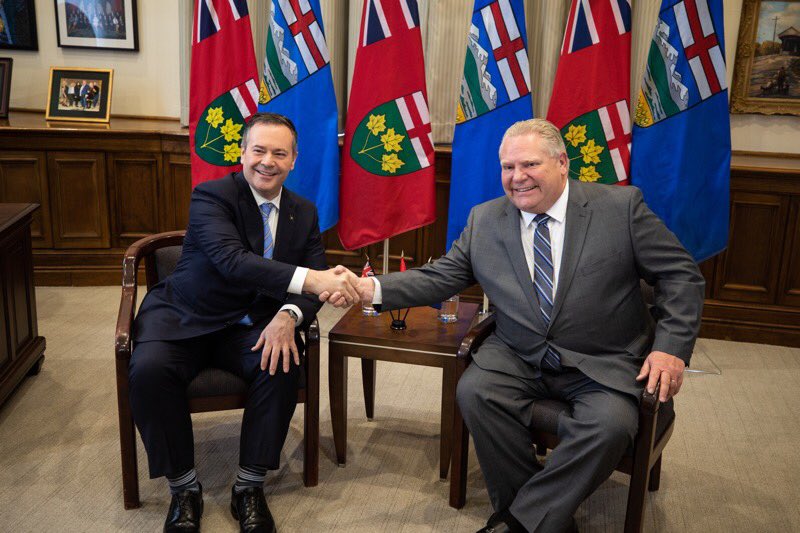 Alberta’s new Premier Jason Kenney, left, shakes hands with Ontario Premier Doug Ford. Both Conservative Premiers have promised tax cuts for corporations, though Kenney is the first to follow through with his plans, which will result in $1.5 billion of lost revenue for the province. Twitter photo

Alberta’s new Conservative Premier Jason Kenney is forging ahead with an election promise to slash the province’s corporate tax rate from 12 percent to 8 percent over the next four years. The first round of Kenney’s so-called “Job Creation Tax Cut” comes into effect July 1.

Kenney said the cuts will create 55,000 jobs and boost the economy. But as C4TF’s Toby Sanger pointed out in an op-ed last month, there is little evidence that cuts for big business lead to increased investment -- especially in Alberta, where many of the largest corporations are primarily foreign-owned. Those foreign owners may benefit, but regular Albertans will face cuts to social programs in order to finance the series of cuts that are expected to cost the province $1.5 billion in revenue every year.

Several political and economic experts also weighed in with skepticism this week. One political analyst who spoke with 660 News said the cuts offer “no guarantee” of job creation.  In fact, shifting the tax burden onto citizens could create a backlash, cautioned another University of Calgary expert in a Financial Post story this week, referencing past PC Premier Jim Prentice’s unpopular plans four years ago  to raise on taxes on Albertans, but not corporations. Another economist interviewed by Press Progress pointed out that similar cuts in the US under President Trump have failed to produce any trickle down effect on workers’ wages. 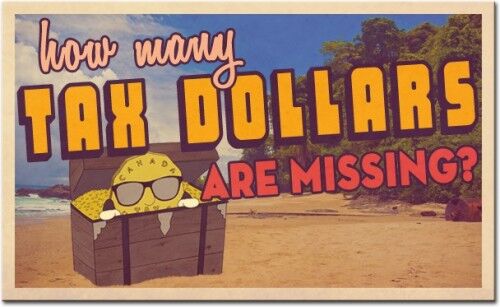 The Senate is urging the House of Commons to pass a bill that would help Canada fight tax evasion. Bill S-243 was drafted by tax fairness advocate Senator Percy Downe. It was approved by the Senate last year and is currently before the House. If passed, the bill would require Canada Revenue Agency to publish how much it loses to offshore tax evasion through its Tax Gap report.

As Canada’s Parliamentary Budget Officer has pointed out, the government lacks the necessary data to fully calculate how big the problem is. Having this reporting requirement enshrined in law would be an important step in the fight against offshore tax evasion, an area where the CRA is falling behind, Senator Downe points out in an op-ed this week in Policy Options Magazine.

In a motion put forward this month, the Senate noted that the bill has been before the House for many months now and should be passed as soon as possible. C4TF, a long-time supporter of the bill, estimates Canada loses $10 billion and $15 billion a year in revenues from just the reported use of tax havens by corporations alone. 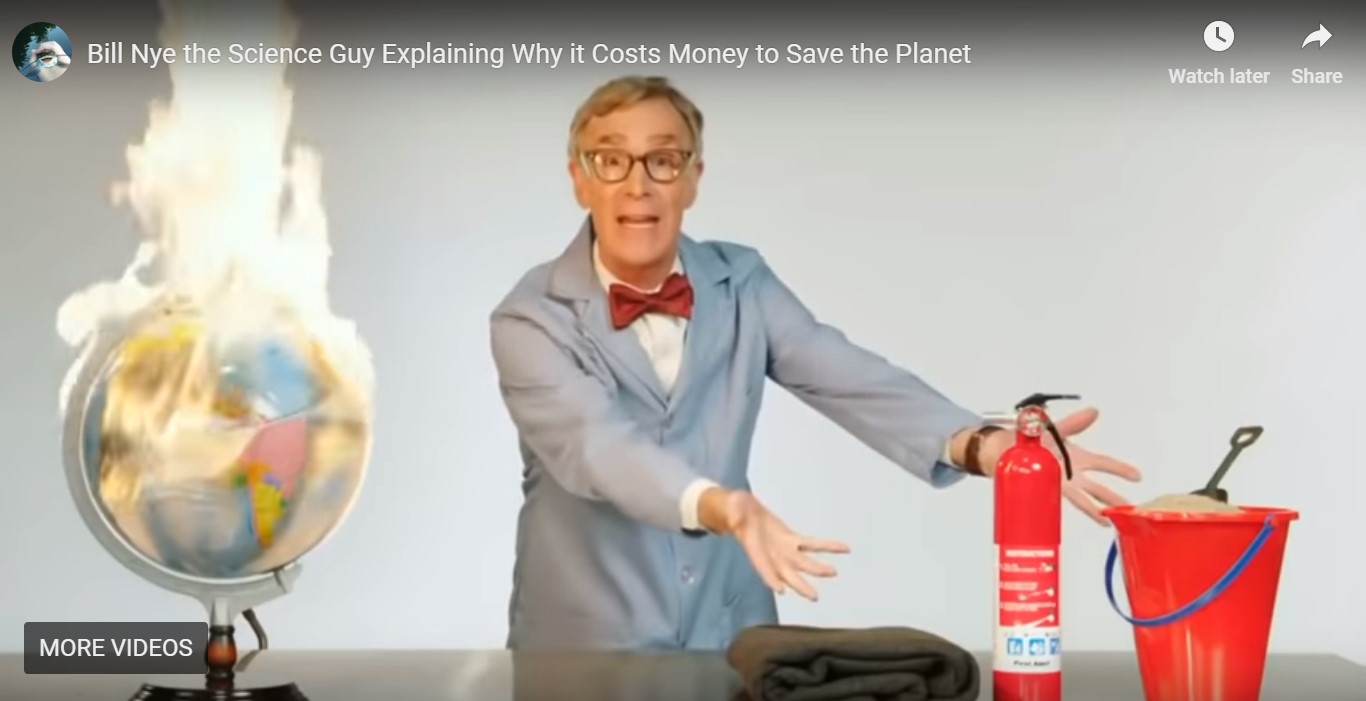 Ontario Premier Doug Ford’s anti-carbon tax campaign is coming under fire from pundits of all political stripes. The PCs launched their anti-tax crusade last month to protest the federal government’s carbon pricing system. Highlights of the campaign have so far included television commercials and mandatory stickers at gas pumps falsely claiming the pricing measures will hurt Canadians -- despite non-partisan studies that have indicated otherwise.

Ontario’s Auditor General came out this week and said the ads would never have passed an independent review for advertising standards because they neglect to “include all the relevant facts.” The AG also came down on the PCs for using the ads to criticize another level of government while presenting their own in a positive light.

The province’s AG isn’t the only one who feels that way – the editorial board of every major newspaper in Canada chimed in on the PCs’ problematic campaign. Enjoy Doug Ford’s feel-bad movie of the summer -- you paid for it, the Globe wrote. Doug Ford’s anti-carbon tax stickers hit a new low, penned the Star. Even the Sun took a punch: Ford’s party should pay for partisan ads.

Then there were the social media responses. This Hour Has 22 Minutes summed it up nicely with a tweet: “Ontario launches anti-carbon-tax TV ads paid for by taxpayers. Yes they're taking Ontarians' money to tell them someone else is taking their money.”

But it was a video by American celebrity scientist Bill Nye the Science Guy that really lit things up this week. Though not in direct response to Ford’s anti-carbon tax campaign, Nye’s message was aimed at climate change skeptics and critics of carbon pricing plans around the globe. In the now viral video, a normally polite and reserved Nye makes generous use of the f-word to emphasize that the planet is on fire and there is no such thing as a “free” solution. 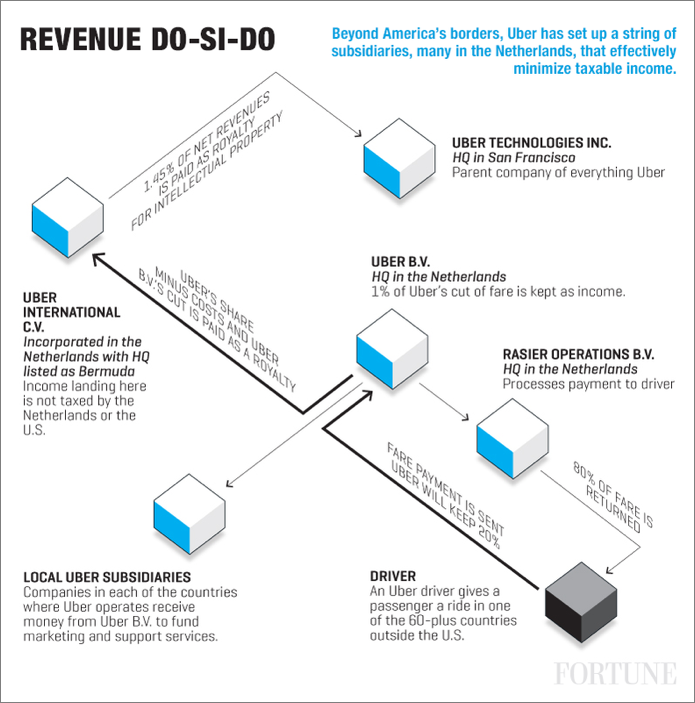 An infographic in Fortune Magazine explains how Uber is able to avoid taxes.

As the popular driving service Uber made its initial public offering debut this week, tax fairness and labour advocates continue to call on governments and consumers to take a stand against the poor ethical track record of precarious work employers and tax-avoiding tech giants.

It’s worth re-reading this Fortune Magazine article from 2015, which details how the San Francisco-based company was set-up as a massive tax avoidance scheme. Uber established a new business entity in the Netherlands, where it shifted ownership of its foreign subsidiaries and profits of its intellectual property. The company’s success, spawned by their ability to skirt taxes, raises concerns about how countries and cities can get booming online service providers such as Lyft and Airbnb to pay their fair share.

As global bodies such as the IMF and OECD seek to reform international corporate tax structures that allow profit-shifting and mass-scale tax avoidance, investors may be wise to find another wave to ride in the stock market.

Please consider making a donation to Canadians for Tax Fairness to help us campaign for fair and progressive tax policies.