Just when you thought Hollywood’s remaking of the Panama Papers scandal couldn’t get any juicier, lawyers at the Panamanian law firm at the centre of the The Laundromat story are now suing Netflix for airing the film this week. Ramon Fonseca and Jurgen Mossack, the two figures caught up in the 2016 offshore scandal, argue the movie interferes with their right to a fair trial. The pair are currently being investigated by the FBI.

The film will be available on Netflix Canada starting Friday 18 October and will also be shown on the big screens in select theatres across Canada this week including Ottawa’s Mayfair,  Montreal’s Dollar Cinema and Edmonton's Princess Theatre. The movie played earlier in Vancouver and Toronto.

The 2016 Panama Papers were ground breaking because they introduced average citizens to the secret world of offshore tax havens. The film’s release couldn’t be more apt as thousands gathered in Washington this week for the International Monetary Fund and World Bank meetings, where discussions will include how to fundamentally reform the international corporate tax system to reduce offshore tax dodging. Closer to home, the Laundromat airs days before voters head to the polls and question what this government has done –and what other parties are promising to do—to tackle tax havens. 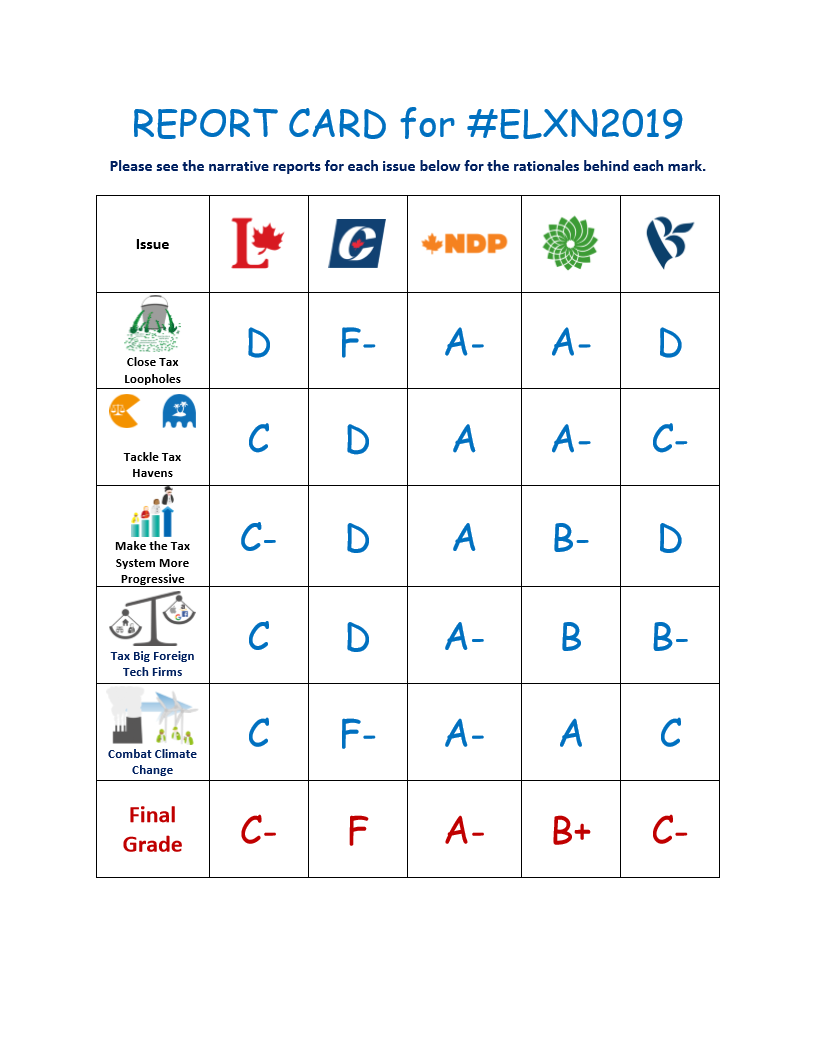 Overall marks considered how the policies promote fairness, such as whether they benefit the wealthy over average or lower-income individuals and if they reduce inequality or contribute to it. Our 7-page report and summary can be read here.

The NDP is tops with an overall mark of A- for producing one of the most progressive platforms in decades, with the best plans to close tax loopholes, tackle tax havens, make the tax system more progressive and level the digital playing field by taxing foreign  e-commerce giants.

The Greens weren’t too far behind with a B+ for their ambitious proposals including increasing the carbon pricing system and closing tax loopholes. The Liberals and the Bloc both tied in third place with a score of C- after releasing platforms that mostly skipped over tax fairness measures while the Conservatives came in dead last with an F for their platform, which included proposals to reintroduce tax breaks for millionaires and restore ineffective expensive tax credits.

While there are many issues for Canadians to consider this election, tax fairness is critical for both reducing inequality and raising the funds to pay for other important prioirties. Please go out and vote accordingly!

With days to go before the election, momentum has been building for progressive tax policies. Even the wealthy are demanding fairer taxes, argues this excellent op-ed in theStar this week from Resource Movement, a group of privileged young people advocating for social and economic change. Two other pieces in National Newswatch and the Hamilton Spectator this week dismiss the popular election promises that tax cuts will lead to a stronger economy. 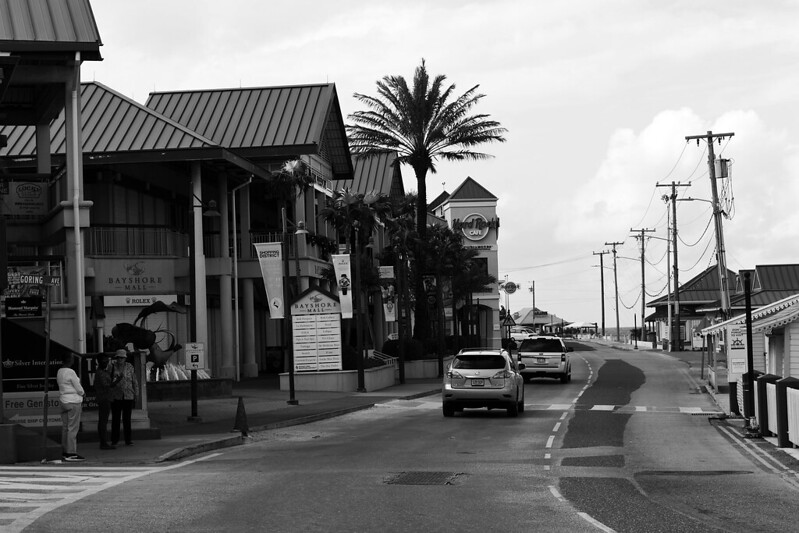 George Town, Cayman Islands. The British territory has agreed to create a public registry of owners of corporations. Pontla, Flickr

A known tax haven has outpaced Canada in committing to create a public registry of the true ‘beneficial’ owners of companies.

The Cayman Islands agreed last week to establish a public registry as part of is requirement under a UK law that will force British territories to adopt the corporate transparency measure by 2023.

Transparency International UK said in a statement the move “represents a major victory in the fight against corruption. We urge other British Overseas Territories to follow their lead in combatting dirty money.”

The UK was one of the world’s first to implement a public registry, which has been identified by experts as a leading tool in the fight against corruption, including tax avoidance and evasion.

Canada, despite its international reputation as being soft on financial crime, has been slow to act.

A recent op-ed in the Globe and Mail criticized some of the parties’ election promises to fight money laundering with a federal inquiry, instead highlighting the less costly, more effective solution of a public registry of corporate owners.

Just this week the head of the Ontario Real Estate Association –and former Ontario PC leader—penned a similar op-ed in the Toronto Sun arguing a registry would not only help deter criminals from the housing market but make it easier for Canadians to buy a home.

As pressure mounts on provincial and federal governments here, the US has recently made progress pushing through bipartisan legislation requiring companies to disclose their true owners. 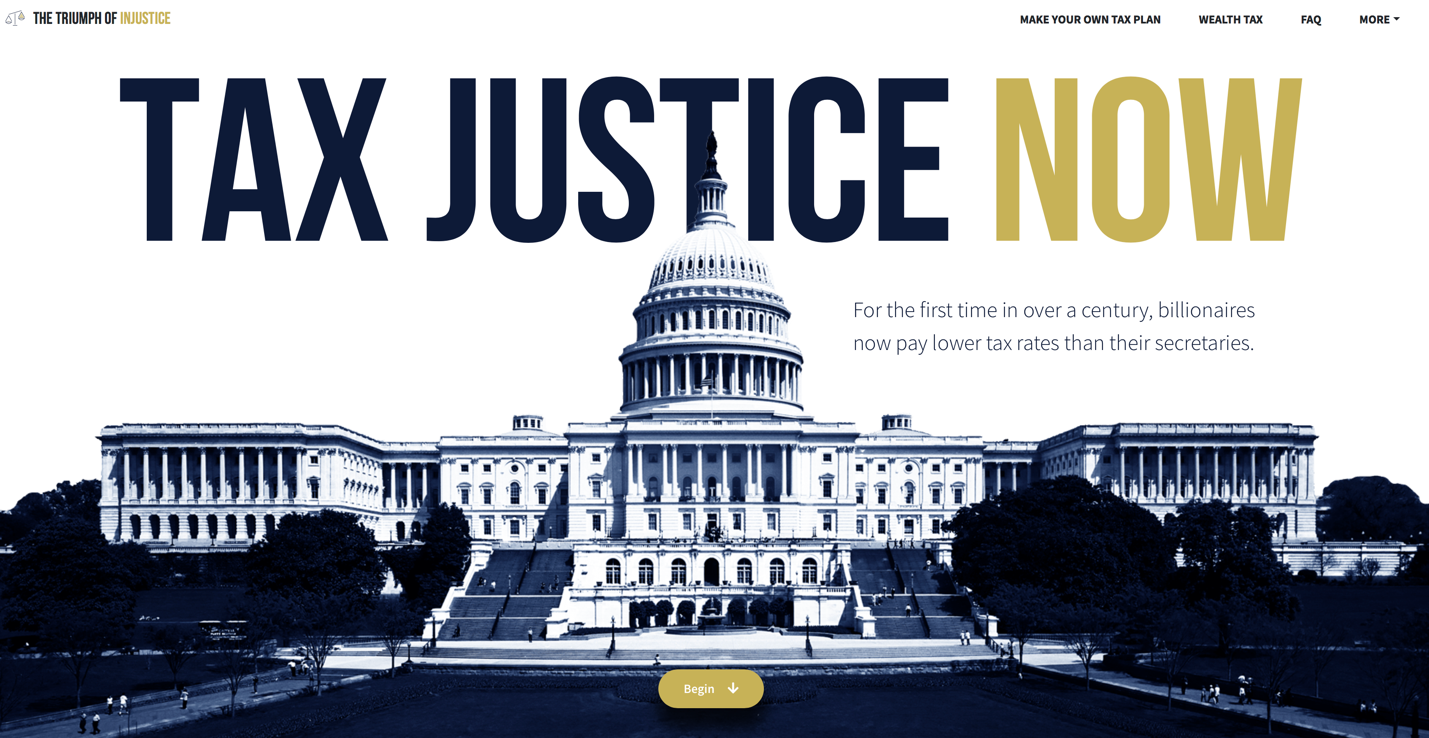 Nobel-prize winning economists and other experts describe it as “a ground-breaking work,” “eye-opening,” “armed with eye-popping data,” and “the most important book I’ve read on government policy in along time.”

The Triumph of Injustice: How the Rich Dodge Taxes and How to Make Them Pay, by University of California economists Emmanuel Saez and Gabriel Zucman, dramatically demonstrates how, for the first time in a century, billionaires in the US now pay a lower overall tax rate than all other income groups, including the working class and the poor. The book was released this week.

The U.S. used to have the most progressive tax system in the world. That’s all been reversed due to the slashing of corporate income taxes, increase in payroll and sales taxes, collapse in capital taxation and estate taxes, and widespread tax avoidance by the wealthy.

The authors argue the U.S. should introduce a minimum international corporate tax of 25 percent, which can be unilaterally implemented, introduce a tax on extreme wealth, as the NDP has also proposed, and replace regressive payroll, sales and poll taxes for health care with a comprehensive national income tax on all forms of income and profit.  This would be enough to fund free tuition and public childcare for all.

Saez and Zucman also launched a companion website: Tax Justice Now. This interactive open source tool allows users to model different tax proposals in detail, including those of U.S. presidential contenders such as Elizabeth Warren and Bernie Sanders, to show their impact on inequality.