[To keep our supporters informed and connected, we send a newsletter with highlights of recent progressive tax developments in Canada and around the world. You can sign up to receive our newsletter here. Here is this week's roundup of tax fairness news:]

Axed tax credits could get second life under Scheer

Scheer’s proposed Green Public Transit Tax Credit, Children’s Fitness Tax Credit and Children’s Arts Tax Credit are mostly carbon copies of Harper’s versions, which were written off by experts as ineffective and costly, then eventually killed by the Trudeau government.

Some things are better off dead, suggests C4TF director Toby Sanger in a North99 op-ed this week. Sanger points to several studies --from right-wing think-tanks to government experts-- that found the credits failed to do their job.

They didn’t boost ridership or children’s participation in physical activity and the arts. What they did do, Sanger cautions, is exacerbate inequality by paying out mostly to higher-income households while replacing government investments in measures that do make a difference such as affordable transportation or direct subsidies to families. With an estimated cost of more than $500 million a year, the credits would ultimately result in crucial program cuts.

Even right-leaning columnists this week rebuked Scheer’s “lousy public policy,” admitting the government would be throwing away money at privileged families who could do without. The CBC’s Election Fact Check series also ruled the proposal was “misleading” .

The party’s tax-credit rollout kicked off with a pitch to make EI maternity benefits “tax free” – another “misleading” promise, as economic experts pointed out in a Huffington Post article this week.

Many parents with low incomes won’t receive the full value of the credit or any at all because it isn’t refundable.  It also wouldn’t help the estimated 30 percent of new mothers who don’t qualify for EI. The $1 billion  credit would be better spent increasing EI benefits for low-income households, helping families through the refundable Canada Child benefit, or funding an affordable national child care program. 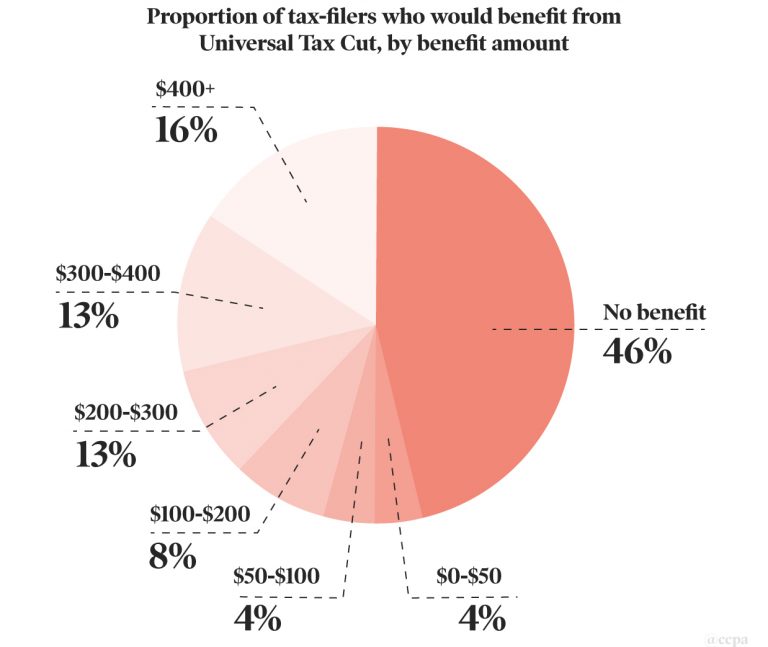 A chart from the Canadian Centre for Policy Alternatives illustrating who would fully benefit from Scheer’s so-called universal tax cut. Spoiler alert: not most of us. Credit: CCPA

In another move from Harper’s playbook, Scheer this week promised a “universal” tax cut, claiming it will save families $850 a year. The party has marketed the policy as a big break for lower-income individuals, but an analysis from the Canadian Centre for Policy Alternatives points out the average benefit would be closer to $400 while the full benefit would go to incomes in the top deciles of the tax bracket.

Two thirds of Canadian tax filers wouldn’t see the full benefit of the cut and almost another third who don’t earn enough to pay taxes would see no benefit at all, C4TF director Toby Sanger pointed out in a Press Progress story this week.

It would also cost $6 billion, according to PBO estimates. “That kind of revenue hole isn’t simply remedied with a nip and a tuck here and there,” a Toronto Star column cautioned.

Tax cuts not only draw government resources away from funding solutions to major issues – they distract attention from them too.

An excellent opinion piece this week in Ricochet media highlights how tax cuts, which are directed at the individual, diminish society’s collective efforts to address urgent problems like housing affordability or climate change. 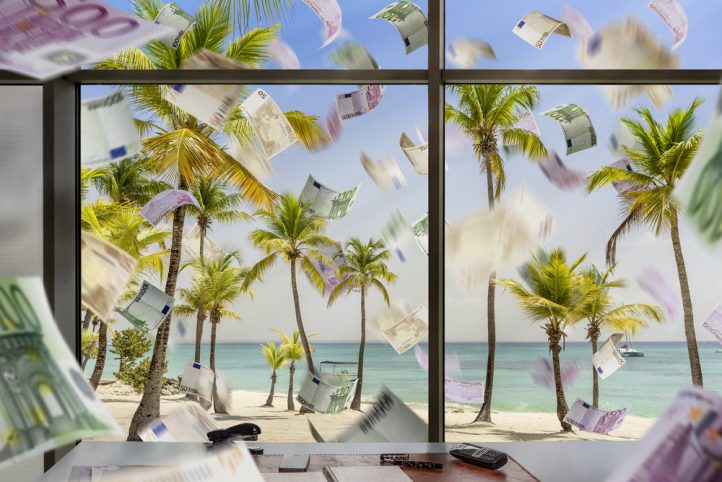 Photo : Our supporters decided tackling tax havens should be a top priority for party leaders this election. Shutterstock

Offshore tax dodging costs Canada at least $8 billion in tax revenues each year and some estimates suggest it could be as high as $25 billion. More than 90 percent of Canadian corporations have subsidiaries in tax havens and nearly 900 Canadians were named in the Panama Papers leaks – numbers that just scratch the surface of the problem.

Some of the world’s largest multinationals like Starbucks, Goldman Sachs, and Nike use tax havens to lower their tax bills. Other countries are raising taxes on corporate tax dodgers, but Canada’s laws often give them a pass.

We encourage you to share our fact sheet [printable version here] that lists steps the government can take to get tough on tax havens and bring in an additional $8 billion in revenues – enough to pay for 4 million affordable childcare spaces or 80,000 nurses.  Ask your local candidates what their positions are on this and other tax fairness issues.

You can also promote our tax fairness campaign by submitting a question to the leaders’ debates, which take place Oct 7 and 10. Sample questions could include: What is your party going to do to crack down on tax havens? Or, will your party commit to closing Canada’s expensive tax loopholes?

And if you haven’t already added your name to our petition, there’s still time to tell party leaders to eliminate unfair tax loopholes.

Stay tuned as we highlight your remaining three priorities and provide an analysis of where the parties stand on tax fairness once all platforms are released next month. 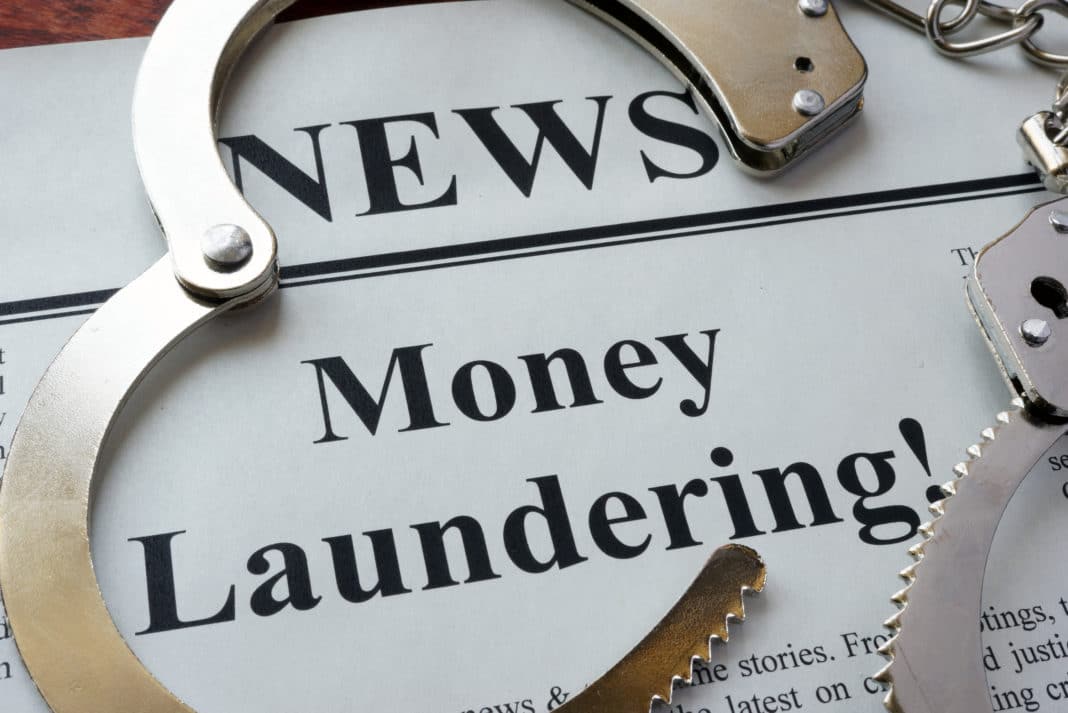 Money laundering on Canadians’ minds ahead of election: poll

Two-thirds of Canadians say money laundering is an issue in their province and even more –81 percent-- say it’s time to address the challenge at a national level, according to a new Angus Reid poll.

The polling was conducted in May this year, after an expert panel conservatively estimated $50 billion is laundered through the economy each year. The BC government responded by calling a public inquiry into the issue and committing to establish a public registry of property owners.

Not surprisingly, the greatest concern --90 percent-- was in BC, followed by Quebec at 83 percent and Alberta at 73 percent. Despite some regional differences, almost half of all Canadians were dissatisfied with the federal government’s anti-money laundering efforts.

A recent story in the Vancouver Sun looked at the pivotal role money laundering could play as a ballot box issue in the upcoming election. It notes only four of 49 recommendations under Ottawa’s responsibility have been completed and federal candidates in the province are campaigning hard on the issue.

In a press release this week, Canadians for Tax Fairness and coalition members Transparency International Canada and Publish What You Pay Canada renewed our call for increased corporate transparency to combat money laundering. Our recommendations include the creation of a pan-Canadian public registry of beneficial owners – the true owners of corporate entities—so that criminals can’t hide behind anonymous corporate shells. 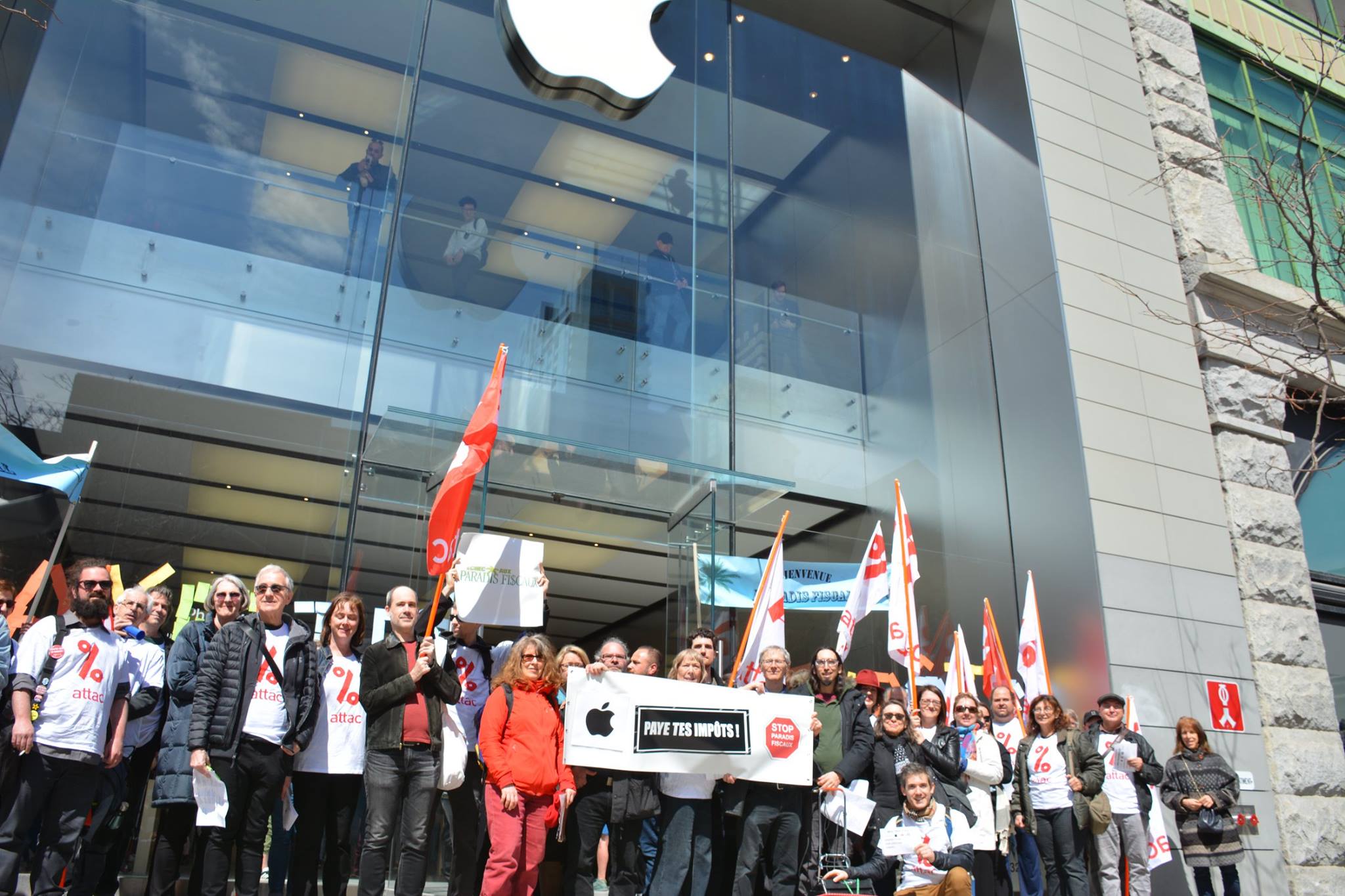 A legal battle over Apple’s taxes made its way to an EU General Court this week with the potential to affect future cases involving international corporate tax rules.

The digital giant located head office of its highly profitable international sales subsidiary, with rights to its intellectual property, in Ireland, despite the company having no physical presence in the low-tax-rate haven. In 2016, the EU’s Competition Commissioner Margrethe Vestager slapped the company with the largest corporate tax fine in history -- $14.4-billion-- alleging Ireland had granted illegal tax benefits in a secret deal to Apple for many years. The Irish Times recently published a detailed feature on the history and politics surrounding the case, also showing that the company paid an effective corporate tax rate on its profits of just 0.005%.

Apple’s history of tax-dodging had also been documented in the Paradise Papers, which the International Consortium of Investigative Journalists reported back in 2017.

While it may be just months before a final ruling, its effects could be enduring. A BNN Bloomberg article this week notes that even if the court rules in Apple’s favor, this gives Vestager the political ammunition to push for fundamental reforms to how digital corporations –and other multinationals-- are taxed.

At a meeting of the Independent Commission for the Reform of International Corporate Taxes (ICRICT) this week, Nobel Prize winning economist Joseph Stiglitz said Ireland has not been a good global citizen in robbing its neighbours of tax revenues with these sweetheart deals. ICRICT—which C4TF is represented on—has been actively developing and strongly advocating for international corporate tax reforms that would force large multinational enterprises to pay their fair share of taxes.

Levelling the digital playing field was also selected by our supporters as a top five tax fairness priority. For too long, internet giants like Google and Facebook have gotten away with paying little taxes, which not only distorts the global economy but hurts Canadian companies and media. Friends of CBC is currently running a petition to stop subsidizing these foreign digital corporations, which we encourage you to sign. We’ll continue to advocate on this issue in the election campaign and beyond.